Hemorrhagic Cerebrovascular Accident Associated with Prior Neurocysticercosis: A Case Report 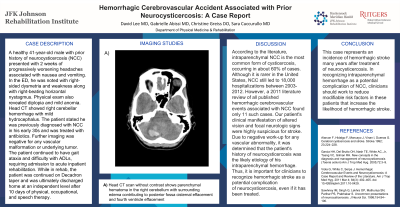 Case Description: A healthy 41-year-old male with prior history of neurocysticercosis (NCC) presented with 2 weeks of progressively worsening headaches associated with nausea and vomiting. In the ED, he was noted with right-sided dysmetria and weakness along with right-beating horizontal nystagmus. Physical exam also revealed diplopia and mild anomia. Head CT showed right cerebellar hemorrhage with mild hydrocephalus. The patient stated he was previously diagnosed with NCC in his early 30s and was treated with antibiotics. Further imaging was negative for any vascular malformation or underlying tumor. The patient continued to have gait ataxia and difficulty with ADLs, requiring admission to acute inpatient rehabilitation. While in rehab, the patient was continued on Decadron taper and was ultimately discharged home at an independent level after 10 days of physical, occupational, and speech therapy.

Discussions: According to the literature, intraparenchymal NCC is the most common form of cysticercosis, occurring in about 60% of cases. Although it is rarer in the United States, NCC still led to 18,000 hospitalizations between 2003-2012. However, a 2011 literature review of all published hemorrhagic cerebrovascular events associated with NCC found only 11 such cases. Our patient's clinical manifestation of altered vision and focal neurologic signs were highly suspicious for stroke. Due to negative work-up for any vascular abnormality, it was determined that the patient's history of neurocysticercosis was the likely etiology of his intraparenchymal hemorrhage. Thus, it is important for clinicians to recognize hemorrhagic stroke as a potential complication of neurocysticercosis, even if it has been treated.

Conclusions: This case presents an incidence of hemorrhagic stroke many years after treatment of neurocysticercosis. In recognizing intraparenchymal hemorrhage as a potential complication of NCC, clinicians should work to reduce modifiable risk factors in these patients that increase the likelihood of hemorrhagic stroke.