The Rare Diagnosis and Management of Cortical Deafness: A Case Report 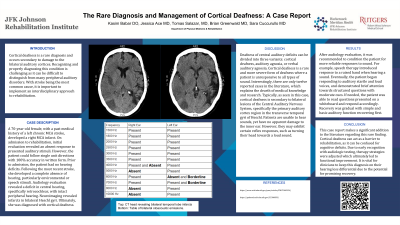 Case Description: A 70-year-old female, with a past medical history of a left chronic MCA stroke, developed a right MCA infarct. On admission to rehabilitation, initial evaluation revealed an absent response to presented auditory stimuli. However, the patient could follow single unit directions with 100% accuracy in written form. Prior to admission, the patient had no hearing deficits. Following the most recent stroke, she developed a complete absence of hearing, particularly environmental or speech stimuli. Audiology evaluation revealed a deficit in central hearing, specifically retrocochlear, with intact peripheral hearing. Neuroimaging revealed infarcts in bilateral Heschl gyri. Ultimately, she was diagnosed with cortical deafness.

Discussions: Deafness of central auditory deficits can be divided into three variants: cortical deafness, auditory agnosia, or verbal auditory agnosia. Cortical deafness is a rare and more severe form of deafness where a patient is unresponsive to all types of sound. Interestingly, there are only twelve reported cases in the literature, which explains the dearth of medical knowledge and research. Typically, as seen in this case, cortical deafness is secondary to bilateral lesions of the Central Auditory Nervous System, specifically the primary auditory cortex region in the transverse temporal gyri of Heschl. Patients are unable to hear sounds, yet have no apparent damage to the inner ear. However, they may exhibit certain reflex responses, such as turning their head towards a loud sound.

Conclusions: This case report makes a significant addition to the literature regarding this rare finding. Cortical deafness can act as a barrier to rehabilitation, as it can be confused for cognitive deficits. Due to early recognition with audiologic testing, therapy strategies were adjusted which ultimately led to functional improvement. It is vital for clinicians to keep this diagnosis on their hearing loss differential due to the potential for promising recovery.