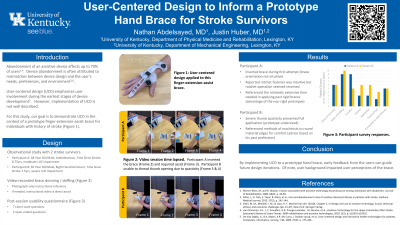 Objectives: Abandonment of an assistive device affects up to 70% of users.  In the stroke population, studies of upper limb devices echo this dismal rate of abandonment.  This is concerning as stroke causes upper limb motor impairment in 85% cases with a majority of survivors not regaining full function.  Device abandonment is often attributed to mismatches between device design and the user’s needs, preferences, and environment.  User-centered design (UCD) is a design approach that emphasizes user involvement during the earliest development stages.  For this study, we implement UCD to develop a prototype brace for individuals with hand impairment due to chronic stroke.

Design: This is an observational study which recruited two stroke survivors to assess a prototype hand brace.  The participants were of similar demographics (male, age 65 and 68 years, time since stroke = 7.5 and 8.75 years) and had moderate/severe left hand hemiparesis.  To implement UCD, participants were invited to a video-recorded session  to assess the device .  Explicit device instruction was avoided so as to assess device intuitiveness.  A post-session survey included 7 Likert-scale questions and 2 open-ended questions about device usability, comfort, quality, and aesthetics.

Results: Analysis of the qualitative data yielded several key findings.  Brace orientation was not intuitive as evidenced by a participant attempting upside-down application.  Thumb spasticity prevented one participant from independently donning device.  Both participants noted difficulty operating the ratcheting fasteners.  One participant identified a potential pressure point.  Of interest, unique historical contexts were self-reported by each participant.  For instance, one participant revealed his prior employment in manufacturing influenced the focus of his feedback.

Conclusions: By implementing UCD to a prototype hand brace, feedback from the intended users is valuable guidance to future design iterations.  Of note, user background impacts user perception of an assistive device.  By appreciating this impact, device abandonment may be improved.