Gadolinium-Induced Encephalopathy After Intrathecal Administration During a Spine Procedure 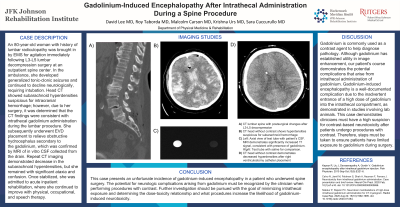 Case Description: An 80-year-old woman with history of lumbar radiculopathy was brought in by EMS for agitation immediately following L3-L5 lumbar decompression surgery at an outpatient spine center. In the ambulance, she developed generalized tonic-clonic seizures and continued to decline neurologically, requiring intubation. Head CT showed subarachnoid hyperdensities suspicious for intracranial hemorrhage; however, due to her surgery, it was determined that the CT findings were consistent with intrathecal gadolinium administration during the lumbar procedure. She subsequently underwent EVD placement to relieve obstructive hydrocephalus secondary to the gadolinium, which was confirmed by MRI of in vitro CSF collected from the drain. Repeat CT imaging demonstrated decrease in the subarachnoid hyperdensities, but she remained with significant ataxia and confusion. Once stabilized, she was admitted to acute inpatient rehabilitation, where she continued to improve with physical, occupational, and speech therapy.

Discussions: Gadolinium is commonly used as a contrast agent to help diagnose pathology. Although gadolinium has established utility in image enhancement, our patient's course demonstrates the potential complications that arise from intrathecal administration of gadolinium. Gadolinium-induced encephalopathy is a well-documented complication due to the inadvertent entrance of a high dose of gadolinium into the intrathecal compartment, as demonstrated in studies involving lab animals. This case demonstrates clinicians must have a high suspicion for contrast-based neurotoxicity after patients undergo procedures with contrast. Therefore, steps must be taken to ensure patients have limited exposure to gadolinium during surgery.

Conclusions: This case presents an unfortunate incidence of gadolinium-induced encephalopathy in a patient who underwent spine surgery. The potential for neurologic complications arising from gadolinium must be recognized by the clinician when performing procedures with contrast. Further investigation should be pursued with the goal of minimizing intrathecal exposure and determining the dose-toxicity relationship and what procedures increase the likelihood of gadolinium-induced neurotoxicity.