A Rare Occurrence of Heterotopic Ossification in Anoxic Brain Injury: A Case Report 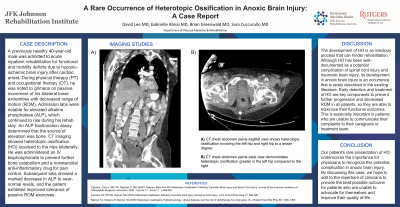 Case Diagnosis: A 40-year-old male who developed heterotopic ossification in the context of anoxic brain injury

Case Description: A previously healthy 40-year-old male was admitted to acute inpatient rehabilitation for functional and mobility deficits due to hypoxic-ischemic brain injury after cardiac arrest. During physical therapy (PT) and occupational therapy (OT), he was noted to grimace on passive movement of his bilateral lower extremities with decreased range of motion (ROM). Admission labs were notable for elevated alkaline phosphatase (ALP), which continued to rise during his rehab stay. An ALP fractionation assay determined that the source of elevation was bone. CT imaging showed heterotopic ossification (HO) localized to the hips bilaterally. He was administered an IV bisphosphonate to prevent further bone catabolism and a nonsteroidal anti-inflammatory drug for pain control. Subsequent labs showed a marked decrease in ALP to near-normal levels, and the patient exhibited improved tolerance of passive ROM exercises.

Discussions: The development of HO is an insidious process that can hinder rehabilitation. Although HO has been well-documented as a potential complication of spinal cord injury and traumatic brain injury, its development in anoxic brain injury is an occurrence that is rarely described in the existing literature. Early detection and treatment of HO are key components to prevent further progression and decreased ROM in all patients, so they are able to maximize their functional outcomes. This is especially important in patients who are unable to communicate their complaints to their caregivers or treatment team.

Conclusions: Our patient's rare presentation of HO underscores the importance for physicians to recognize this potential complication in anoxic brain injury. By discussing this case, we hope to add to the repertoire of clinicians to provide the best possible outcome for patients who are unable to advocate for themselves and improve their quality of life.