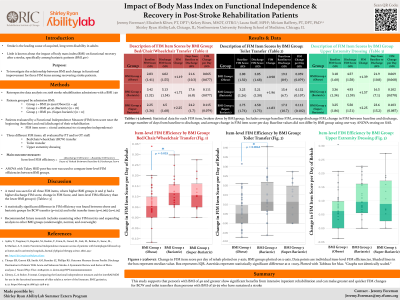 Objectives: Stroke is the leading cause of long-term disability in adults. However, little is known about the impact of body mass index (BMI) on functional recovery after a stroke, specifically among bariatric patients (BMI 40+). This study investigates the relationship between BMI and change in functional independence measure per day of rehab (FIM efficiency) among recovering stroke patients.

Conclusions: Data suggests that stroke patients with higher BMIs (bariatric and super-bariatric groups) may have higher FIMeff than obese patients in FIM tasks requiring full body mobility, but not in upper body tasks. Future research should examine the full FIM measures to determine if this trend is replicated among other activities, as well as expanded to include lower weight BMI groups (underweight, normal, and overweight).