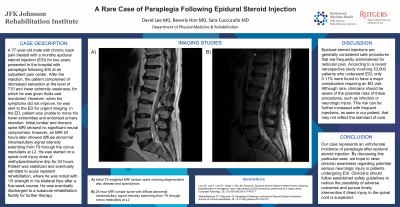 Case Description: A 77-year-old male with chronic back pain treated with a monthly epidural steroid injection (ESI) for two years presented to the hospital with paraplegia following ESI at an outpatient pain center. After the injection, the patient complained of decreased sensation at the level of T10 and lower extremity weakness, for which he was given fluids and monitored. However, when his symptoms did not improve, he was sent to the ED for urgent imaging. In the ED, patient was unable to move his lower extremities and endorsed urinary retention. Lumbar and thoracic spine MRI showed no significant neural compromise. He was started on a spinal cord injury dose of methylprednisolone drip for 24 hours. Patient was stabilized and eventually admitted to acute inpatient rehabilitation, where he was noted with 1/5 strength in his bilateral hips after a five-week course. He was eventually discharged to a subacute rehabilitation facility for further therapy.

Discussions: Epidural steroid injections are generally considered safe procedures that are frequently administered for radicular pain. According to a recent retrospective study involving 53,000 patients who underwent ESI, only 0.11% were found to have a major complication requiring an ED visit. Although rare, clinicians should be aware of the potential risks of these procedures, such as infection or neurologic injury. This risk can be further increased with frequent injections, as seen in our patient, that may not reflect the standard of care.

Conclusions: Our case represents an unfortunate incidence of paraplegia after epidural steroid injection. By discussing this particular case, we hope to raise clinician awareness regarding potential serious neurologic injury in patients undergoing ESI. Clinicians should follow established safety guidelines to reduce the possibility of adverse outcomes and pursue timely intervention if direct injury to the spinal cord is suspected.