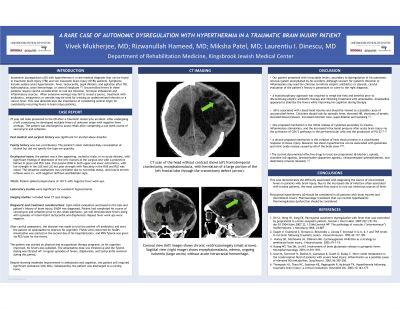 Case Description: 27M was admitted to the acute rehabilitation service after a traumatic motorcycle accident. After undergoing a left craniotomy at the outside hospital, he developed multiple fevers of unknown origin with negative fever workups. Patient was discharged to acute rehab on a one week course of vancomycin and cefepime. Despite receiving intravenous antibiotics, he continued to experience fevers along with episodes of intermittent tachycardia and diaphoresis. Extensive fever work ups were negative. Patient continued labetalol for BP control, amantadine was started to improve cognition, and standing Tylenol was given via PEG tube for the fevers. As his cognition improved and his fevers subsided, the amantadine dose was titrated up and the Tylenol dosing was titrated off. Irregular episodes of fevers, diaphoresis, and tachycardia resolved during this period.

Conclusions: This case demonstrates the difficulty associated with diagnosing the source of uncontrolled fevers in patients with traumatic brain injury. Due to the increased risk of infection often associated with trauma patients, the initial reaction is to consider infectious sources of fever. However, paroxysmal hyperthermic autonomic dysregulation should be considered in all patients with brain injuries and intermittent fevers. Pharmacologic treatment that can control hypothalamic thermoregulatory dysfunction should be considered.