A Case of Newly Diagnosed Dandy-Walker Malformation in an Adult 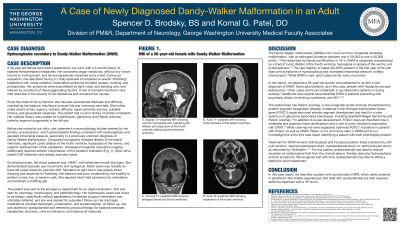 Case Description: A 56-year-old female accountant with hypertension, glaucoma, and Peters’ anomaly in her left eye presented to our clinic with a 3-month history of progressively worsening bilateral frontotemporal headaches. Her symptoms began insidiously and without any known inciting event. Associated symptoms included nausea, vomiting, photophobia, dizziness, urinary urgency, and memory difficulty. She further noted balance difficulties resulting in a fall and numerous near falls. Neuroradiology studies demonstrated findings consistent with hydrocephalus and elevated intracranial pressure, secondary to a previously unknown diagnosis of DWM. On examination, she was unable to perform a heel, toe, or tandem walk. She required hand-held assistance for ambulation and exhibited a shuffling gait. She was started on acetazolamide and referred to physical therapy for balance exercises. Her headaches, dizziness, urinary incontinence, and balance all improved. Seven months later, she underwent placement of a ventriculoperitoneal (VP) shunt, leading to a significant resolution in her symptoms.

Discussions: The Dandy-Walker Malformation is the most common congenital cerebellar malformation and is classically characterized by a triad of cystic dilation of the fourth ventricle, hypoplasia or aplasia of the cerebellar vermis, and hydrocephalus. The vast majority of cases (80–90%) present in the first year of life with signs and symptoms of hydrocephalus and increased intracranial pressure. In this report, we describe a 56-year-old woman who presented to us with a new diagnosis of DWM. For this patient, acetazolamide was used to reduce secretion of cerebrospinal fluid from the choroid plexus, thereby reducing hydrocephalus and temporarily ameliorating her symptoms. Ultimately, she required placement of a VP shunt, which led to resolution of her headaches.

Conclusions: In this case report, we describe a patient with symptomatic DWM, which rarely presents in adulthood. She initially experienced mild relief with acetazolamide but later required definitive treatment with a VP shunt.