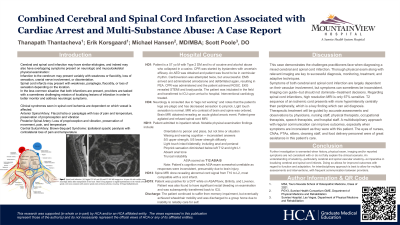 Case Description: Described here is the case of a 57-year-old male with a history of alcohol and cocaine abuse who presented after witnessed cardiac arrest. The patient was noted to have neurologic deficit on arrival and MRI subsequently revealed evidence of an acute global anoxic cerebral event. However, his symptoms were not fully explained by this finding, and subsequent thoracic and lumbar spine MRI revealed a cord infarction as well. Given the global nature of his brain anoxia, combined with his spinal cord infarct, determining the Neurological Level of Injury and thus the ASIA Impairment Scale for this spinal cord injury were challenging.

Discussions: Cerebral and spinal cord infarctions have similar etiologies, and indeed have some overlapping symptoms present on neurologic and musculoskeletal physical examination.  Infarction to the cerebrum may present variably with weakness or flaccidity, loss of sensation, cranial nerve involvement, or disorientation.  Spinal cord infarcts may present with weakness, paraplegia, flaccidity, or loss of sensation depending on the location.  However, when both systems are involved, it is difficult for providers to localize lesions of infarction and track progression of neurologic symptoms.

Conclusions: After transfer to Rehab, the patient suffered both clotting and bleeding complications that resulted in an ICU stay. Upon return to Rehab, the patient ultimately achieved wheelchair functionality, however he was discharged to a group home due to cognitive deficits secondary to his anoxic brain injury.