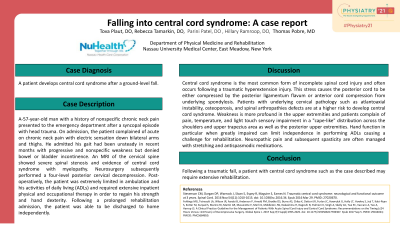 A-57-year-old man with a history of nonspecific chronic neck pain presented to the emergency department after a syncopal episode with head trauma. On admission, the patient complained of acute on chronic neck pain with electric sensation down bilateral arms and thighs. He admitted his gait had been unsteady in recent months with progressive and nonspecific weakness but denied bowel or bladder incontinence. An MRI of the cervical spine showed severe spinal stenosis and evidence of central cord syndrome with myelopathy. Neurosurgery subsequently performed a four-level posterior cervical decompression. Post-operatively, the patient was extremely limited in ambulation and his activities of daily living (ADLs) and required extensive inpatient physical and occupational therapy in order to regain his strength and hand dexterity. Following a prolonged rehabilitation admission, the patient was able to be discharged to home independently.

Discussions: Central cord syndrome is the most common form of incomplete spinal cord injury and often occurs following a traumatic hyperextension injury. This stress causes the posterior cord to be either compressed by the posterior ligamentum flavum or anterior cord compression from underlying spondylosis. Patients with underlying cervical pathology such as atlantoaxial instability, osteoporosis, and spinal arthropathies defects are at a higher risk to develop central cord syndrome. Weakness is more profound in the upper extremities and patients complain of pain, temperature, and light touch sensory impairment in a "cape-like" distribution across the shoulders and upper trapezius area as well as the posterior upper extremities. Hand function in particular when greatly impaired can limit independence in performing ADLs causing a challenge for rehabilitation. Neuropathic pain and subsequent spasticity are often managed with stretching and antispasmodic medications.

Conclusions: Following a traumatic fall, a patient with central cord syndrome such as the case described may require extensive rehabilitation.