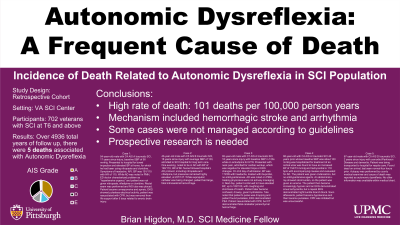 Objectives: Describe the incidence of death related to autonomic dysreflexia in a spinal cord injury population

Design: A retrospective chart review was performed on a cohort of patients with SCI who had a standardized annual evaluation performed between 10/1/2009 and 9/30/2013 at an SCI Center. In patients who had died, their were reviewed further, and it was recorded if the death was attributable to AD. For each patient, the length of follow up was calculated as the number of days from the date their annual examination to either the date of their death or the date of chart review. The incidence of death was calculated as the number of attributed deaths per length of follow up.

Results: There were 702 patients with an injury level of T6 or higher with a mean follow up length of 7.0 years. There were five deaths found to be related to AD and 98 deaths with an unknown etiology. The incidence of mortality related to AD was 101 deaths per 100,000 person years. For the purpose of both clinical practice and future study design, the clinical circumstances for each death will be discussed.

Conclusions: In the study population, AD was a frequent cause of death. There are two important limitations of this study. There was limited information available for deaths that occurred outside of a VA hospital, so that the cause of death was unknown for many individuals. In addition, the population was defined as all of those with an injury at T6 or above, not considering whether they had a previous history of AD. In combination, these two limitations suggest that the actual rate of death related to AD among those with a history of AD is even higher.