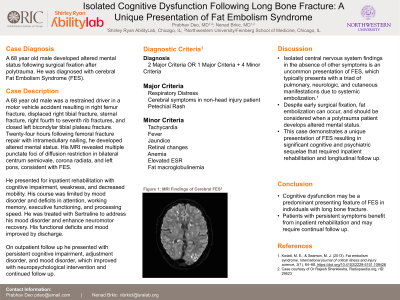 He presented for inpatient rehabilitation with cognitive impairment, weakness, and decreased mobility. His course was limited by mood disorder and deficits in attention, working memory, executive functioning, and processing speed. He was treated with Sertraline to address his mood disorder and enhance neuromotor recovery. His functional deficits and mood improved by discharge. On outpatient follow up he presented with continued cognitive impairment, adjustment disorder, and mood disorder, which benefited from neuropsychological intervention.


Discussions: Early fixation of fracture reduces the chance of developing FES. The patient developed this complication despite prompt fixation of his femoral fracture. Isolated Central Nervous System (CNS) findings in the absence of other symptoms is an uncommon presentation of FES, which typically presents with a triad of pulmonary, neurologic, and cutaneous manifestations due to systemic embolization. In the small subset of patients with isolated CNS findings, deficits are generally mild and transient in nature. This case demonstrates a unique presentation of FES resulting in significant cognitive and psychiatric sequelae that required inpatient rehabilitation and longitudinal follow up.

Conclusions: Cognitive symptoms may be a predominant presenting feature of FES in individuals with long bone fracture. Patients with persistent, significant symptoms benefit from inpatient rehabilitation and may require continual follow up.