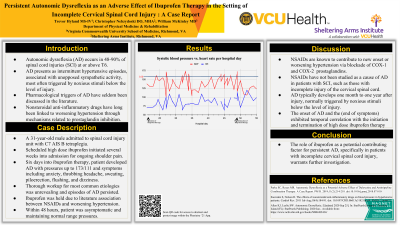 Case Description: 31-year-old male admitted to inpatient rehabilitation with traumatic cervical spinal cord injury. Initial ASIA examination was consistent with C7 AIS B tetraplegia. Rehab course was complicated by orthostatic hypotension, spasticity, sacral pressure injury, and shoulder pain managed with scheduled high-dose ibuprofen. He also had neurogenic bladder complicated by urinary tract infection (UTI).  One month after admission, he developed persistent autonomic dysreflexia (AD), with blood pressures up to 173/111 while supine that normalized upon sitting at edge of bed. He was thoroughly assessed and treated for common causes of AD, including irritants below the level of injury like bladder distension, bowel obstipation, pressure injuries and undiagnosed fractures. Workup was unrevealing and episodes of AD continued. Finally, ibuprofen was held based on its association with hypertension. Within 48 hours of discontinuing ibuprofen, AD resolved and he was maintaining systolic pressures in the 100s-130s, regardless of body position.

Discussions: Development of an acute-onset elevation of systolic BP greater than 20 mmHg above baseline is consistent with AD. For our patient, placing him in the upright, seated position and loosening compressive garments resolved individual episodes. Though a definitive cause of AD could not be determined, we noted that our patient’s medications included high-dose, scheduled NSAIDs. NSAIDs are known to contribute to development of new onset or worsening hypertension. This occurs by blocking the vasodilatory effects of COX-1 prostaglandins and the diuretic and natriuretic effects of COX-2 prostaglandins. Several factors causing AD are well-documented, but ibuprofen has not previously been identified as a potential contributor to this condition.

Conclusions: Ibuprofen may be considered as a potential contributing factor for persistent AD in patients with incomplete cervical spinal cord injury.