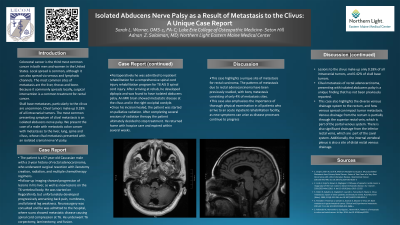 Case Description: A 67-year-old male with a 3 year history of rectal adenocarcinoma, who underwent surgical resection with ileostomy creation, radiation, and multiple chemotherapy regimens.  Follow-up imaging showed progression of lesions in his liver, as well as new lesions on the T6 vertebral body.  He was started on Regorafenib, but unfortunately developed progressively worsening back pain, numbness, and weakness of bilateral legs. Neurosurgery was consulted and he was admitted to the hospital, where scans showed metastatic disease causing spinal cord compression at T6. He underwent T6 corpectomy, laminectomy, and fusion. Postoperatively he was admitted to inpatient rehabilitation for a comprehensive spinal cord injury rehabilitation program for T8 AIS D spinal cord injury. After arriving at rehab, he developed diplopia and was found to have isolated abducens palsy. An MRI brain showed metastatic disease at the clivus and the right occipital condyle. Once his incision healed, the patient was started on palliative radiation.

Conclusions: It is important to perform detailed physical examinations on patients at acute rehabilitation facilities. Disease progression can occur and may present with new and isolated signs and symptoms. Metastatic lesions can occur at highly unlikely locations.