Visual disturbance after removal of Cerebellar Hemangioblastoma in acute rehabilitation: a case report 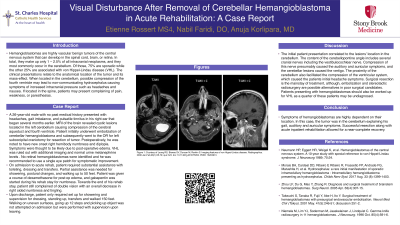 Case Description: A 26-year-old male with no past medical history presented with headaches, gait imbalance, and pulsatile tinnitus in his right ear for several months. MRI of the brain revealed cystic lesions in the left cerebellum and the tumor was resected. Postoperatively, right hemibody numbness and diplopia were noted and attributed to edema. VHL work-up was negative. Patient was given a single-eye patch for diplopia, a course of dexamethasone for edema, and gabapentin for numbness. Initially, patient required substantial assistance with toileting, dressing and transfers. Partial assistance was needed for showering, postural changes, and walking up to 50 feet. Upon discharge, patient only required set up for showering and supervision for dressing, standing up, transfers and walked 150 feet. Walking on uneven surfaces, going up 12 steps and picking up object was not attempted on admission but were performed with supervision upon leaving.

Conclusions: Symptoms of hemangioblastomas are highly dependent on their location. In this case, the tumor was located in the cerebellum explaining his gait, auditory and auricular symptoms. Successful resection along with acute inpatient rehabilitation allowed for a near-complete recovery.