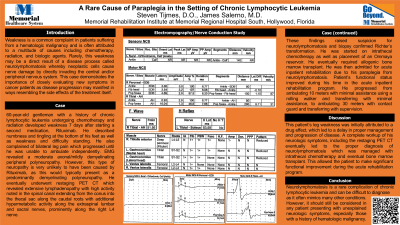 Case Diagnosis: A 60-year-old gentleman with a history of chronic lymphocytic leukemia (CLL) undergoing treatment developed weakness seven days after starting Rituximab. He described numbness and tingling at the bottom of his feet as well as weakness and difficulty standing. He also complained of bilateral leg pain which progressed until he was unable to ambulate independently.

Case Description: EMG revealed a moderate axonal/mildly demyelinating peripheral polyneuropathy. However, polyneuropathy due to Rituximab would typically present as a predominantly demyelinating polyneuropathy.  He eventually underwent restaging PET CT which revealed extensive lymphadenopathy with high activity noted in the spinal canal extending from the conus into the thecal sac along the caudal roots with additional hypermetabolic activity along the extraspinal lumbar and sacral nerves. These findings raised suspicion for neurolymphomatosis and biopsy confirmed Richter’s transformation. He was started on intrathecal chemotherapy as well as placement of an Ommaya reservoir. He eventually required allogenic bone marrow transplant. He was then admitted for acute inpatient rehabilitation due to his paraplegia. His functional status subsequently improved from ambulating 10 meters with minimal assistance using a rolling walker and transferring with minimal assistance, to ambulating 30 meters with contact guard and transferring with supervision.

Discussions: This patient’s leg weakness was initially attributed to a drug effect, which delayed proper management and progression of disease. A complete workup of his neurologic symptoms, including the restaging PET CT, eventually led to the proper diagnosis of neurolymphomatosis which was managed with intrathecal chemotherapy and eventual bone marrow transplant. This allowed the patient to make significant functional improvement during the acute rehabilitation program.

Conclusions: Neurolymphomatosis is a rare complication of CLL and can be difficult to diagnose as it often mimics many other conditions. However, it should still be considered in any patient presenting with unexplained neurologic symptoms, especially those with a history of hematologic malignancy.