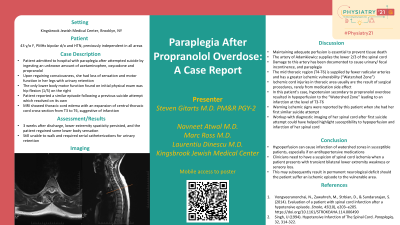 Case Description: A 43-year-old Female with bipolar disorder and HTN, previously fully functioning and independent in all areas, was admitted with paraplegia after attempted suicide by ingesting an unknown amount of tylenol, oxycodone, and propranolol. The symptoms were noted upon regaining consciousness after ingestion, as loss of sensation and motor function in her legs. Lower-body motor function found on the physical exam was trace hip flexion (1/5) on the right, with loss of all lower body sensation and urinary retention requiring a Foley catheter.
A similar episode following a previous suicide attempt occurred which resolved on its own. Admission, LFTs, CK, and tylenol levels were elevated. Acetylcysteine and fluids started for Tylenol toxicity and rhabdomyolysis.
MRI showed thoracic cord edema with an expansion of central thoracic cord cross-section from T3 to T6, suggestive of infarction, likely due to hypotension from propranolol overdose.

Discussions: Maintaining adequate perfusion is an essential requirement to prevent tissue death. The T3-T6 region has a greater ischemic vulnerability (“Watershed Zone”). Ischemic cord injuries in this area are often the result of surgical procedures, particularly aortic surgery. In this case, hypotension by propranolol overdose resulted in hypoperfusion to the “Watershed Zone,” causing infarction of T3-T6. Warning ischemic signs were reported by this patient when she had the first similar suicide attempt. Further workup with diagnostic imaging of her spinal cord after her first suicide attempt may have highlighted her susceptibility to hypoperfusion and infarction of this area of the spinal cord.

Conclusions: Hypoperfusion can cause infarction in watershed zones in susceptible patients who are also on antihypertensive medications. The clinician needs to have a high suspicion of spinal cord ischemia when one presents with transient bilateral lower extremity weakness or sensory loss, as this may subsequently result in permanent neurological deficits.