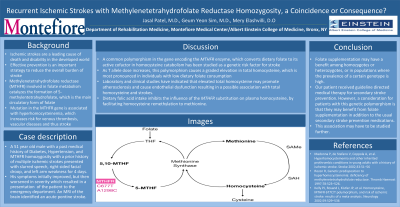 Case Description: This is a 51 year old male with a past medical history of Diabetes, Hypertension, and Methylenetetrahydrofolate Reductase (MTHFR) homozygosity with a prior history of multiple ischemic strokes who presented with slurred speech, facial droop and left arm weakness for 4 days. Symptoms initially improved, but then worsened in severity leading to the patient presenting to the emergency department. MRI Brain identified an acute right pontine stroke. He was transferred to acute inpatient rehabilitation, and his neurological deficits improved with physical, speech and occupational therapies.

Discussions: Despite recent advances in acute stroke therapy, effective prevention is an important strategy to reduce the overall burden of stroke. A common polymorphism in the gene encoding the MTHFR enzyme, which converts dietary folate to its active cofactor in homocysteine catabolism, has been studied as a genetic risk factor for stroke. Specifically, as T allele dose increases, this functional polymorphism causes a graded elevation in total homocysteine. This is most pronounced in individuals with low dietary folate consumption, which places them at increased risk of stroke. Laboratory and clinical studies have indicated that elevated total homocysteine may promote atherosclerosis and cause endothelial dysfunction resulting in a possible association with total homocysteine and strokes. Dietary folic acid intake inhibits the influence of the MTHFR substitution on plasma homocysteine, by facilitating homocysteine remethylation to methionine.

Conclusions: It is possible that folate supplementation may have a benefit among homozygotes or heterozygotes, or in populations where the prevalence of a certain genotype is high. Our patient received guideline directed medical therapy for secondary stroke prevention. However, a consideration for patients with this genetic polymorphism is that they may benefit from folate supplementation in addition to the usual secondary stroke prevention medications. This association may have to be studied further.