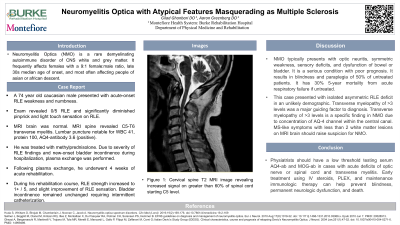 Discussions: Neuromyelitis Optica (NMO) is a rare demyelinating autoimmune disorder of CNS white and grey matter. It frequently affects females with a 9:1 female:male ratio, late 30s median age of onset, and most often affecting people of asian or african descent. It typically presents with optic neuritis, symmetric weakness, sensory deficits, and dysfunction of bowel or bladder. It is a serious condition with poor prognosis. It results in blindness and paraplegia of 50% of untreated patients. It has 30% 5-year mortality from acute respiratory failure if untreated.

This case presented with isolated asymmetric RLE deficit in an unlikely demographic. Transverse myelopathy of >3 levels was a major guiding factor to diagnosis. Transverse myelopathy of >3 levels is a specific finding in NMO due to concentration of AQ-4 channel within the central canal. MS-like symptoms with less than 2 white matter lesions on MRI brain should raise suspicion for NMO.