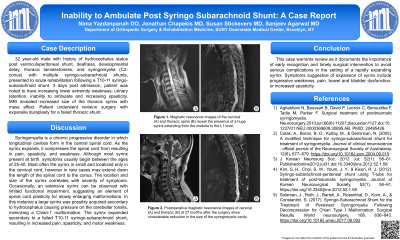 Discussions: Syringomyelia is a chronic progressive disorder in which longitudinal cavities form in the central spinal cord. As the syrinx expands, it compresses the spinal cord from resulting in pain, spasticity, and weakness. Although most syrinx present at birth, symptoms usually begin between the ages of 25-40. Most often the syrinx is small and localized only in the cervical cord, however in rare cases may extend down the length of the spinal cord to the conus. The location and size of the syrinx correlates with severity of symptoms. Occasionally, an extensive syrinx can be observed with limited functional impairment, suggesting an element of spinal cord plasticity for slowly enlarging malformations. In this instance a large syrinx was possibly acquired secondary to hydrocephalus causing pressure on the cerebellar tonsils, mimicking a Chiari-1 malformation. The syrinx expanded secondary to a failed T10-11 syringo-subarachnoid shunt, resulting in increased pain, spasticity, and motor weakness.

Conclusions: This case warrants review as it documents the importance of early recognition and timely surgical intervention to avoid serious complications in the setting of a rapidly expanding syrinx. Symptoms suggestive of expansion of syrinx include progressive weakness, pain, bowel and bladder dysfunction, or increased spasticity.