Multiple sclerosis flare up vs. acute stroke: a case report 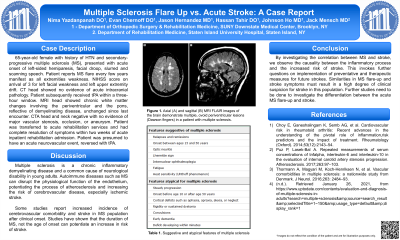 Discussions: Multiple sclerosis is a chronic inflammatory demyelinating disease and a common cause of neurological disability in young adults. Autoimmune diseases such as MS can disrupt the physiological function of the endothelium, potentiating the process of atherosclerosis and increasing the risk of cerebrovascular disease, especially ischemic stroke.
Some studies report increased incidence of cerebrovascular comorbidity and stroke in MS population after clinical onset. Studies have shown that the duration of MS, not the age of onset can potentiate an increase in risk of stroke.

Conclusions: By investigating the correlation between MS and stroke, we observe the causality between the inflammatory process and the increased risk of stroke. This invokes further questions on implementation of preventative and therapeutic measures for future strokes. Similarities in MS flare-up and stroke symptoms must result in a high degree of clinical suspicion for stroke in this population. Further studies need to be done to investigate the differentiation between the acute MS flare-up and stroke.