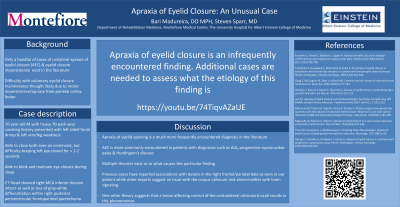 Case Description: 70-year-old male with past medical history of heavy tobacco use (50 pack-year history) presented with left-sided facial droop & left arm/leg weakness. Patient able to close both eyes on verbal command but noted to have difficulty keeping left eye closed for more than 1-2 seconds. He was able to blink and maintain eye closure during sleep. CT head showed demarcated right MCA inferior division territory infarct with associated occlusion as well as loss of gray-white differentiation within right posterior periventricular frontoparietal parenchyma. Difficulty with voluntary eyelid closure maintenance thought likely due to motor impersistence/apraxia from a lesion in the parietal cortex. He was discharged to acute rehabilitation.

Discussions: Unilateral apraxia of eyelid closure (AEC) & eyelid closure impersistence are uncommon findings with only a handful of cases reported in the literature. While post-stroke AEC is reported, it is more commonly encountered in patients with diagnoses such as ALS, progressive supranuclear palsy & Huntingtons’ disease. There are multiple theories as to what causes this particular finding. Previous cases have reported associations with lesions in the right frontal/parietal lobe as seen in our patient while other reports suggest an issue with the corpus callosum and abnormalities with brain signaling. One other theory suggests that a lesion affecting control of the contralateral orbicularis oculi results in this phenomenon.

Conclusions: Apraxia of eyelid closure is an infrequently encountered finding. Additional cases are needed to assess what the etiology of this finding is.