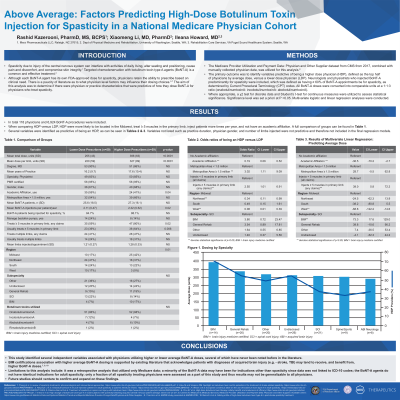 Objectives: The objective of this study was to perform an exploratory analysis to identify physician characteristics predictive of botulinum toxin (BoNT) dosing in spasticity.

Design: The primary outcome was to identify variables predictive of being a higher dose physician (HDP), defined as the top half of physicians by average dose, versus a lower dose physician (LDP). Medicare data for 2017, combined with manually collected physician data, provided the physician characteristics and BoNT dosage used in analyses. Neurologists and physiatrists who injected BoNT predominantly for spasticity were included. Multivariate logistic and linear regression analyses were conducted. All BoNT doses were converted into incobotulinumtoxinA and onabotulinumtoxinA units.