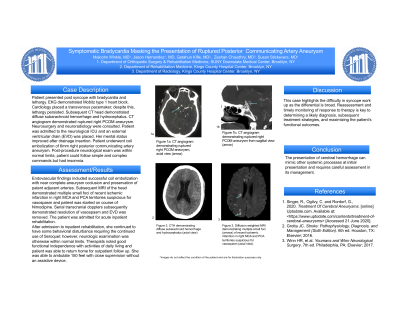 Discussions: After admission to inpatient rehabilitation, she continued to have some behavioral disturbance requiring the continued use of Seroquel, however neurologic examination was otherwise within normal limits. She was able to ambulate 150 feet with close supervision without an assistive device.Therapists noted good functional independence with activities of daily living and patient was able to return home for outpatient follow up.

This case highlights the difficulty in syncope work up as the differential is so broad. Reassessment and timely monitoring of response to therapy is key to determining likely diagnosis and subsequent treatment strategies.

Conclusions: The presentation of cerebral hemorrhage can mimic other systemic processes at initial presentation and requires careful assessment in its management.