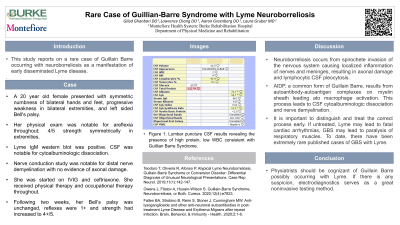 Case Description: A 20 year old female presented with symmetric numbness of bilateral hands and feet, progressive weakness in bilateral extremities, and left sided Bell's palsy. Her physical exam was notable for areflexia throughout; 4/5 strength symmetrically in extremities. Lyme IgM western blot was positive. CSF was notable for cytoalbuminologic dissociation. Nerve conduction study was notable for distal nerve demyelination with no evidence of axonal damage. She was started on IVIG and ceftriaxone. She received physical therapy and occupational therapy throughout. Following two weeks, her Bell’s palsy was unchanged, reflexes were 1+ and strength had increased to 4+/5.


Discussions: This study reports on a rare case of Guillain Barre occurring with neuroborreliosis as a manifestation of early disseminated Lyme disease.

Neuroborreliosis occurs from spirochete invasion of the nervous system causing localized inflammation of nerves and meninges, resulting in axonal damage and lymphocytic CSF pleocytosis.
AIDP, a common form of Guillain Barre, results from autoantibody-autoantigen complexes on myelin sheath leading to macrophage activation. This process leads to CSF cytoalbuminologic dissociation and nerve demyelination.
It is important to distinguish and treat the correct process early. If untreated, Lyme may lead to fatal cardiac arrhythmias, GBS may lead to paralysis of respiratory muscles. To date, there have been extremely rare published cases of GBS with Lyme.

Conclusions: Physiatrists should be cognizant of Guillain Barre possibly occurring with Lyme. If there is any suspicion, electrodiagnostics serve as a great noninvasive testing method.