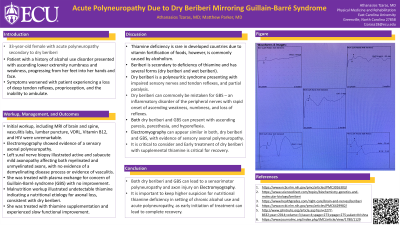 Case Description: Patient with a history of alcohol use presented with ascending lower extremity numbness and weakness, and loss of deep tendon reflexes. She was empirically treated with plasma exchange for concerns of Guillain-Barré Syndrome (GBS). Initial workup, including magnetic resonance imaging of the brain and spine, vasculitis labs, lumbar puncture, VDRL, and HIV, was unremarkable. Electrodiagnostic (EDX) testing showed a predominately sensory axonal polyneuropathy. Left sural nerve biopsy illustrated active and subacute mild axonopathy affecting both myelinated and unmyelinated axons. A sensory axonal variant of GBS was suspected due to clinical presentation and plasma exchange was continued, however symptoms did not improve. Subsequent malnutrition workup revealed undetectable thiamine indicating a nutritional etiology for axonal loss, consistent with dry beriberi. She was treated with thiamine supplementation and experienced slow functional improvement.

Discussions: GBS is typically a demyelinating motor polyneuropathy, however there are reported variants of sensory axonal GBS. In this variant, EDX findings can be similar to other sensory axonal polyneuropathies, such as thiamine deficiency. It is unclear if sural sparing would be associated with this variant. Thiamine deficiency is rare in developed countries due to vitamin fortification of foods, however is commonly seen in alcoholism. Beriberi is secondary to thiamine deficiency and has several types. Dry beriberi is a polyneuritic syndrome which can present with ascending paresis, paresthesia, and hyporeflexia, similarly to GBS. Early treatment of dry beriberi with supplemental thiamine is critical for recovery.

Conclusions: Both dry beriberi and GBS can present with progressive ascending weakness and areflexia. EDX findings of a predominately sensory axonal polyneuropathy has a broad differential. It is important to keep a higher suspicion for thiamine deficiency causing an acute polyneuropathy in the setting of chronic alcohol use, as early initiation of treatment can lead to recovery.