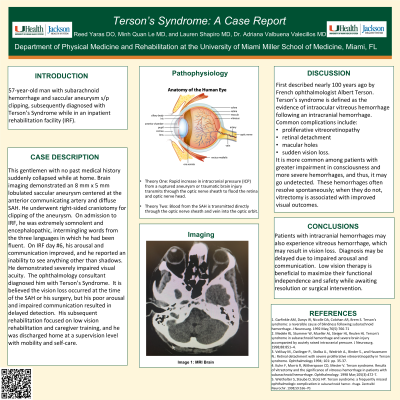 Case Description: This gentlemen with no past medical history suddenly collapsed while at home. Brain imaging demonstrated an 8 mm x 5 mm lobulated saccular aneurysm centered at the anterior communicating artery and diffuse SAH. He underwent right-sided craniotomy for clipping of the aneurysm. On admission to IRF, he was extremely somnolent and encephalopathic, intermingling words from the three languages in which he had been fluent. On IRF day #6, his arousal and communication improved, and he reported an inability to see anything other than shadows. He demonstrated severely impaired visual acuity. The ophthalmology consultant diagnosed him with Terson’s Syndrome. It is believed the vision loss occurred at the time of the SAH or his surgery, but his poor arousal and impaired communication resulted in delayed detection. His subsequent rehabilitation focused on low vision rehabilitation and caregiver training, and he was discharged home at a supervision level with mobility and self-care.

Discussions: First described nearly 100 years ago by French ophthalmologist Albert Terson, Terson’s syndrome is defined as the evidence of intraocular vitreous hemorrhage following an intracranial hemorrhage. Common complications include proliferative vitreoretinopathy, retinal detachment, macular holes, and sudden vision loss. It is more common among patients with greater impairment in consciousness and more severe hemorrhages, and thus, it may go undetected. These hemorrhages often resolve spontaneously; when they do not, vitrectomy is associated with improved visual outcomes.

Conclusions: Patients with intracranial hemorrhages may also experience vitreous hemorrhage, which may result in vision loss. Diagnosis may be delayed due to impaired arousal and communication. Low vision therapy is beneficial to maximize their functional independence and safety while awaiting resolution or surgical intervention.