Rehabilitation of an adult male with neurosarcoidosis and Chiari malformation type 1: A Case Study 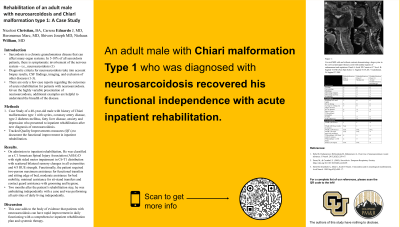 Case Description: This patient had a history of Chiari Malformation type 1 with cerebellar herniation, as well as a large syrinx. He underwent decompression seven years prior to his presentation. In 2020, the patient had left upper and left lower extremity numbness and neck pain. This progressed to dysphagia, ataxia, proprioceptive impairments, and urinary and bowel retention. He started dexamethasone and underwent surgical decompression. At the rehabilitation unit, the patient had patchy impairment to light touch and proprioception affecting his left lower extremity. He had 4/5 strength in bilateral hip flexors. The patient had ataxia and decreased endurance affecting his left lower extremity. The patient required two-person maximum assistance for functional transfers, moderate assistance for bed mobility and minimal assistance for sit-stand transfers. After 18 days, the patient was discharged home with home health therapies. He was ambulating using a front-wheeled walker and was independent in hygiene, grooming and bowel regimen.

Discussions: We describe a case of neurosarcoidosis affecting the cervical and thoracic spinal cord in an individual with known Chiari I malformation and associated syrinx decompression. The patient initially responded to Chiari decompression in 2014, but in 2020 redeveloped the same initial symptoms (left upper and lower extremity numbness and neck pain), along with new symptoms of bilateral lower extremity weakness, ataxia, proprioceptive impairment, dysphagia, urinary and bowel retention. It is unclear to what extent his symptoms responded to surgical decompression compared to the use of steroids, or both, since these were used for treatment in both hospitalizations.

Conclusions: While the number of documented cases of neurosarcoidosis in acute rehabilitation are few, our patient demonstrated tangible improvements after an 18-day comprehensive rehabilitation stay. He was able to sustain his functional improvements as noted at his 2-month outpatient follow up.