Parkinson's neuropathy: To medicate or not to medicate? 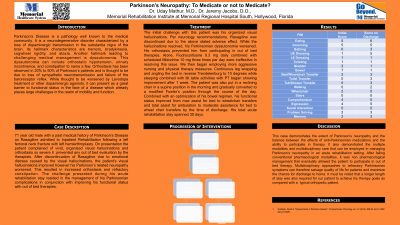 Case Description: We present a 71 year old male with a past medical history of Parkinson’s on Rasagiline admitted to inpatient rehabilitation following Left femoral neck fracture following left hemiarthroplasty. On presentation he complained of vivid, organized visual hallucinations and severe orthostasis, preventing any out of bed evaluation with therapists. After discontinuing Rasagiline due to emotional distress, his visual hallucinations improved but his Parkinson’s related neuropathy worsened, resulting in increased orthostasis and refractory constipation. His orthostasis was unresponsive to conventional pharmacological treatments such as Midodrine and Fludrocortisone, and his constipation required aggressive daily bowel regimen to manage.  After implementing reverse Trendelenberg at night, supine position in recliner transitioning to modified Fowler’s, and tilt table during physical therapy, his orthostasis significantly resolved. Initially total assist on admission, the patient achieved a level of moderate assistance for transfers and 30 feet ambulation with a rolling walker on discharge.

Discussions: This case demonstrates the extent of Parkinson’s neuropathy and the balance between the effects of anti Parkinsonian medications and the ability to participate in therapy. It also demonstrated the multiple modalities that can be employed in managing Parkinson’s neuropathy in an acute rehabilitation setting. After implementing conventional pharmacological modalities, it was non pharmacological management that eventually allowed the patient to participate in out of bed therapy. Multidisciplinary approaches to refractory orthostasis can therefore salvage quality of life for patients and maximize the chance for discharge to home.

Conclusions: Parkinson’s neuropathy requires a multidisciplinary approach involving all levels of care. A multidisciplinary approach can allow patients to remain with a maximized level of independence rather than requiring high levels of assistance for the remainder of their lives. While we tend to rely on pharmacological modalities to treat refractory Parkinson’s neuropathy, many non pharmacological modalities exist that can change the trajectory of a patient’s acute rehabilitation stay.