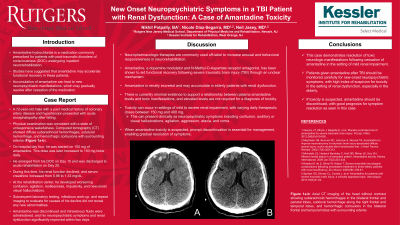 Case Diagnosis: Amantadine Toxicity in the Setting of Renal Dysfunction

Case Description: A 72-year-old male presented to the hospital with confusion after a fall, with neuroimaging revealing diffuse subarachnoid hemorrhage, bilateral subdural hematomas, and fronto-temporal contusions. His physical exam was consistent with a state of unresponsive wakefulness, and amantadine 100 mg daily was started on day four. The dose was later increased to 150 mg twice daily. He emerged on day 15, and was discharged to acute rehabilitation on day 20. Soon after, he developed worsening confusion, impulsivity, agitation, and new-onset visual hallucinations. His renal function also declined and his creatinine increased from 0.96 mg/dL to 1.33 mg/dL. All additional laboratory values were within normal limits, his vital signs were stable, and repeat neuroimaging showed no acute changes. Amantadine was discontinued and intravenous fluids were administered. Within two days, his neuropsychiatric symptoms and renal dysfunction resolved.

Discussions: Amantadine has been shown to aid recovery following severe traumatic brain injury (TBI). It is renally excreted and can accumulate in elderly patients with renal dysfunction. Toxicity can occur in mild to severe renal impairment, with varying therapeutic doses between 150 mg and 400 mg daily. This can present as neuropsychiatric symptoms including confusion, hallucinations, aggression, ataxia, and coma. There is currently minimal evidence correlating plasma amantadine levels and toxic manifestations, and elevated levels are not required for a diagnosis of toxicity. When amantadine toxicity is identified, prompt discontinuation is essential for management, enabling gradual resolution of symptoms.

Conclusions: This case demonstrates resolution of neuropsychiatric manifestations following cessation of amantadine with mild renal impairment. Patients given amantadine after TBI should be carefully monitored for new-onset neuropsychiatric symptoms, with high index of suspicion for toxicity in the setting of renal dysfunction, especially in the elderly. If toxicity is suspected, amantadine should be discontinued, with good prognosis for symptom resolution.