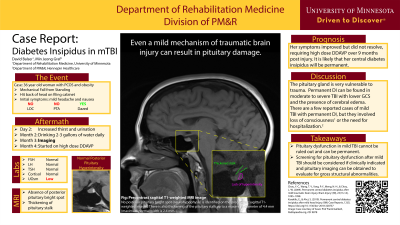 Case Description: A 36 year old female with a past medical history of polycystic ovarian disease sustained a fall from standing, with the back of her head hitting a metal filing cabinet.  There was no witnessed loss of consciousness or posttraumatic amnesia. She felt dazed.  Her symptoms included a mild headache, nausea, increased thirst, and increased urination two days after the fall.  Physical exam was unremarkable. Her menstrual cycle was unchanged.  When she was evaluated by endocrinology 2 months later, she was drinking 2-3 gallons of water per day.  Laboratory studies were notable for low urine osmolality, but normal prolactin, FSH, LH, TSH, and cortisol. T1-weighted Brain MRI at 3 months post-injury showed the absence of a posterior pituitary bright spot with thickening of the pituitary stalk. She was started on DDAVP with persistent symptoms after 4 months and a high dose regimen.

Discussions: Diabetes insipidus is a known complication of traumatic brain injury (TBI), occurring in 18% of patients with moderate or severe TBI but very rarely (1% or less) in mild TBI.  Rare case reports of central diabetes insipidus in mild TBI diagnosed by water deprivation testing or lack of neurohypophyseal hyperintensity exist in the literature, but these were associated with loss of consciousness, hospitalization, and/or a high velocity mechanism of injury. Whether the patient's condition is permanent remains to be seen, but the persistent symptoms requiring high level of DDAVP suggests makes persistence likely.

Conclusions: Central diabetes insipidus is rare in mild TBI. The absence of any objective measures of severity does not preclude the possibility of post-traumatic posterior pituitary dysfunction such as central diabetes insipidus. Though rare, advanced workup including imaging may be indicated if the patient has compelling clinical evidence of this condition despite its regular association with moderate to severe TBI.