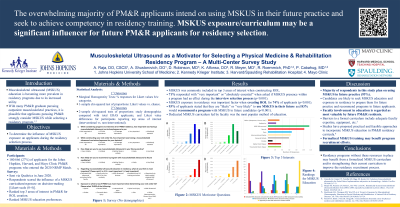 Objectives: With a rise in outpatient musculoskeletal practices, it is plausible that applicants pursuing PM&R consider musculoskeletal ultrasound (MSKUS) exposure while selecting a residency program. This study aimed to evaluate the relative importance of MSKUS on applicants’ residency selection process.

Design: In this descriptive survey study, three university-based PM&R programs in the Mid-Atlantic, Northeast, and Midwest regions emailed an anonymous survey via Qualtrics to 666 applicants in June 2020. Formal consent was obtained and each applicant was sent a single survey. Three follow-up emails were sent, with the last being one month after the initial email. Respondents (180) graded the influence of a MSKUS curriculum on their decision-making for residency selection. Questions were scored on a Likert scale, spanning 0-4. Additionally, applicants were asked to rank specific areas of PM&R that influenced their decision making. For the primary outcome, a one-sample chi-squared test of proportions was performed to compare responses for each Likert value against chance. Similarly, a one-tailed, one-sample binomial test was performed for the question which asked participants to rank their top areas of interest, to compare proportions against chance.

Results: Participants most commonly included MSKUS in their top three areas of interest when constructing their rank order list (ROL) (p< 0.001). When asked if MSKUS exposure within programs affected the interview selection process, 71% responded with “very important” or “absolutely essential” (3,4 respectively; p< 0.001). For 74% of applicants, exposure to MSKUS in residency was an important factor (score >3) when creating their ROL (p< 0.001). Greater than 92% of applicants stated that they are “likely” or “very likely” (3,4 respectively) to use MSKUS in their future practice and 83% would recommend a program with MSKUS to future applicants (both p< 0.001).

Conclusions: MSKUS exposure may be a significant influencer for current and future PM&R applicants for residency selection.

Objective:  Musculoskeletal Ultrasound (MSKUS) training is becoming more prevalent in residency programs due to its increased utility. With a rise in outpatient musculoskeletal practices, it is plausible that applicants pursuing PM&R strongly consider MSKUS exposure while selecting a residency program. To evaluate the relative importance of MSKUS exposure on applicants’ residency-selection process. The primary aim of this study was to evaluate the relative importance of MSKUS on applicants’ residency-selection process.


Design:  In this descriptive survey study, applicants for three university-based PM&R programs in the Mid-Atlantic, Northeast, and Midwest regions for the 2020 National Resident Matching Program were emailed a survey via Qualtrics. E-mail addresses of applicants were obtained by each institution from the program director workstation on Electronic Residency Application System, with the permission of the Association of American Medical Colleges. The survey was sent in June 2020 to 666 applicants, and formal consent was obtained prior to survey initiation. Survey responses were anonymous and no personal identifying information was shared between institutions to ensure confidentiality. Applicants applying to more than one of the study institutions were only sent a single survey and the survey program utilized IP addresses to prohibit duplicate responses. Two follow-up emails were sent at one-week intervals and a final email was sent one month after the initial email.
Outcome Measures
All authors reviewed and revised the survey with attention to the response process until a final version was uniformly agreed upon. The first section consisted of three questions that aimed to quantify the importance of expected MSKUS exposure on interview selection, rank order list (ROL), and likelihood to recommend a program to others using a five-point Likert scale. Additionally, applicants were asked about the likelihood of using MSKUS in their future practice. Response options ranged from “0=Of no importance” to “4=Absolutely essential” or “0=Very unlikely” to “4=Very likely.” The primary outcome variable was quantifying MSKUS as a motivator based on the Likert scale responses. Study participants were also asked about the importance of exposure to specific PM&R fields (traumatic brain injury, spinal cord injury, stroke, general rehabilitation, interventional spine, pain, sports medicine, MSKUS, pediatrics, and other) on residency selection. In the second section, the applicants ranked the level of importance for the type of MSKUS education they perceived as most important in a residency program. Finally, applicants were asked demographic questions, although, disclosure of demographics was optional.
Data Analysis
Data analysis was performed using SPSS Statistics 26 and MATLAB on institutional computers. For the primary outcome, a one-sample chi-squared test of proportions was performed to compare the responses for each Likert value against chance. Additionally, Marginal Homogeneity Tests were performed to compare whether the percentage of responses for each Likert value was statistically different between the categories. For the question which asked participants to rank their top areas of interest, a one-tailed, one-sample binomial test was performed to compare the proportions against chance. Fisher’s Exact Tests were also performed to evaluate the effect of race and sex on participant interests. Statistical significance was defined as a priori at P-value less than 0.05.


Results:  The survey was completed by 180 individuals, yielding a response rate of 27%. The average age of participants was 28.35 years. Of the respondents, 56 were female, 115 were male and one responded as “other.” There was a significant difference between sex, favoring males to respond positively for the first four questions which inquired about the importance of expected MSKUS exposure on interview selection, ROL, future use in practice, and likelihood to recommend a program to others (p< 0.001 to p=0.042). Males were also less interested in pediatrics (p=0.003), but more likely to place interventional spine in their top 3 areas of interest (p=0.012).
When determining the ROL, exposure to MSKUS was ranked as the most important area of PM&R residency education (p< 0.001) followed by sports medicine (p< 0.001) and pain (p=0.031) as the second and third most common choices, respectively.
MSKUS was considered “very important” or “absolutely essential” (3, 4 respectively) by 71% of participants when evaluating programs for interviews. Similarly, when participants were constructing their ROL, 74% of respondents felt it was “very important” or “absolutely essential” to have a MSKUS curriculum. When participants were asked how likely they were to use ultrasound in future practice, more than 92% responded with “likely” or “very likely” (3, 4 respectively), and 83% reported that they would recommend a program with MSKUS to future applicants. All chi-squared tests of proportions revealed that these percentages were significantly greater than chance (all p< 0.001).
With regards to how participants felt exposure to MSKUS in residency should be structured, participants ranked the following from most to least important (listed in order of average ranking but the percentage of respondents who ranked that option first is indicated in parentheses): dedicated ultrasound curriculum led by faculty (63%), faculty who use ultrasound in clinic routinely (46%), MSKUS lectures (38%), resident-driven ultrasound curriculum (41%) and then opportunity to teach medical students (68%).


Conclusions:  MSKUS exposure may be a significant influencer for current and future PM&R applicants for residency selection.