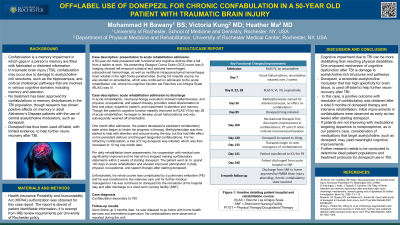 Case Description: A 50-year-old male with a history of anxiety and tobacco use presented with functional and cognitive decline due to severe TBI after a fall at work. Cognitive function per Ranchos Los Amigos Scale was Level IV on admission. He was started on amantadine, but this was stopped after one month due to development of hallucinations. Methylphenidate was then started to help with attention and arousal during the day, but this had little effect on his persistent delirium and frequent tangential
confabulations. For his refractory confabulation, a trial of 5mg donepezil was initiated, which was then increased to 10mg one month later. Per daily rehabilitation team assessments, his cooperation with medical care significantly improved and he had all but stopped making confabulatory statements within 2 weeks of starting donepezil. The patient spent 140 days in acute rehabilitation and showed improved participation in daily physical, occupational, speech therapy after starting donepezil.

Discussions: Cognitive impairments due to TBI can be more debilitating than the resulting physical disabilities. One proposed mechanism is from damage to acetylcholine-rich structures and pathways, such as the hippocampus and cortical cholinergic pathways. Donepezil is a reversible acetylcholine modulator that has high specificity for brain tissue, and is used off-label, with limited evidence, to help further neuro-recovery after traumatic brain injury (TBI).

Conclusions: While use of donepezil for confabulation is off-label, if patients are not improving with medications targeting dopamine or norepinephrine, consideration of medications that target acetylcholine, such as donepezil, may yield meaningful functional gains.