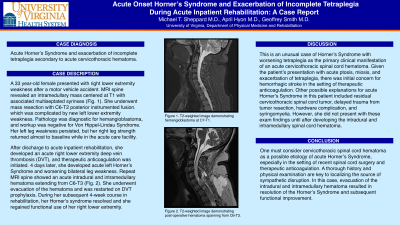 Case Description: A 33 year-old female presented after a motor vehicle accident with right lower extremity weakness. MRI spine revealed an intramedullary mass at C7/T1 with associated multi-septated syrinxes. She underwent mass resection with C6-T2 posterior instrumented fusion. Pathology was diagnostic for hemangioblastoma. Workup was negative for Von Hippel-Lindau Syndrome, and her right lower extremity strength returned almost to baseline. After discharge to acute inpatient rehabilitation, she developed an acute right lower extremity deep vein thrombosis (DVT) and was initiated on therapeutic anticoagulation. 4 days later, she developed acute left Horner’s Syndrome and worsening tetraplegia. Repeat MRI spine showed an acute intradural and intramedullary hematoma extending from C6-T3. She underwent evacuation of the hematoma, and was restarted on DVT prophylaxis. During her subsequent 4-week course in rehabilitation, her Horner’s syndrome resolved and she regained functional use of her right lower extremity.

Discussions: This is an unusual case of Horner’s Syndrome with worsening tetraplegia as the primary clinical manifestation of an acute cervicothoracic spinal cord hematoma. Given the patient’s presentation with acute ptosis, miosis, and exacerbation of tetraplegia, there was initial concern for hemorrhagic stroke in the setting of therapeutic anticoagulation. Other possible explanations for acute Horner’s Syndrome in this patient included the cervicothoracic spinal cord tumor, trauma from tumor resection, and syringomyelia. However, she did not present with these exam findings until after developing the spinal cord hematoma.

Conclusions: One must consider cervicothoracic spinal cord hematoma as a possible cause of acute Horner’s Syndrome, especially in the setting of recent spinal cord surgery and therapeutic anticoagulation. A thorough history and physical examination are key to localizing the source of sympathetic disruption. In this case, evacuation of the intramedullary hematoma resulted in resolution of the Horner’s syndrome and functional improvement.