Acute paraplegia following a Lightning Strike in a 14-year-old boy: A Case Report 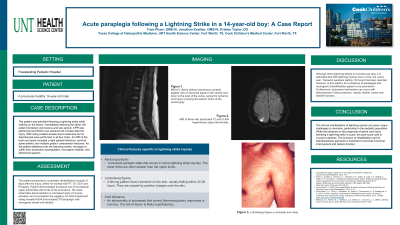 Case Description: A previously healthy 14-year-old male was admitted following a lightning strike while walking on the beach. Immediately following the strike, the patient rendered unconscious and was apneic. CPR was performed and ROSC was achieved 45 minutes after the injury. With rising creatine kinase due to extensive burns, fasciotomies were performed in all four limbs. An MRI of the brain and spine revealed a right parietal infarction, cervical spine edema, and multiple grade I compression fractures. He later presented to a pediatric rehabilitation hospital 21 days after the injury, where he worked with PT, OT, SLP, and Physiatry. ASIA impairment rating revealed ASIA B incomplete T8 paraplegic with neurogenic bowel and bladder.  He demonstrated functional use of his bilateral upper extremities with reduced endurance, but inconsistent muscle activation in the lower extremities. As the patient stabilized, he began to suffer more autonomic dysregulation, neurogenic bladder, and abdominal spasms.

Discussions: Although direct lightning strikes on humans are rare, it is estimated that 400 lightning injuries occur in the U.S. every year. Transient paralysis lasting less than 24 hours has been reported, however, in this patient, the symptoms of paraplegia and neurogenic bowel/bladder appear to be permanent. Furthermore, autonomic dysfunction can occur with disturbances in blood pressure, cardiac rhythm, bowel, and bladder function.

Conclusions: The clinical manifestation of lightning injuries can pose unique challenges to clinicians, particularly in the pediatric population. While the literature on the prognosis of spinal cord injury following a lightning strike is scare, the post-acute care is crucial to address. The inclusion of physiatry and its interdisciplinary approach is important to promote functional improvement and manage long-term sequelae.