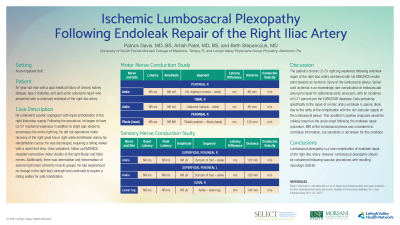 Case Description: The patient is an 87-year-old man with a past medical history of chronic kidney disease, type 2 diabetes, and past aortic aneurysm repair who presented with a continued endoleak of the right iliac artery. He underwent a pelvic angiogram with liquid embolization of the right iliolumbar supply. Post-procedure, he began to have L5-S1 myotomal weakness with pain stated to encompass the entire right leg. He did not experience motor recovery of the right great toe or right ankle dorsiflexion during his rehabilitation course. On discharge, he required a rolling walker with a noted foot drop. Outpatient, follow up EMG/NCS revealed nonreactive motor studies of the right fibular and tibial nerves. Additionally, there was denervation and reinnervation of several right lower extremity muscle groups. He had experienced no change in the right leg's strength and continued to require a rolling walker for safe mobilization

The patient's chronic L5-S1 right leg weakness following endoleak repair of the right iliac artery combined with his EMG/NCS results point towards an ischemic injury of the lumbosacral plexus. Spinal cord ischemia is an exceedingly rare complication of endovascular aneurysm repair for abdominal aortic aneurysm, with an incidence of 0.21 percent per the EUROSTAR database. Data pertaining specifically to the iliac artery endoleak is sparse, likely due to the rarity of the complication with the rich vascular supply of the lumbosacral plexus. This condition's positive prognosis would be unlikely based on the acute onset following the endoleak repair procedure. MRI of the lumbosacral plexus was considered to contribute information, but sensitivity is not known for this condition.