Tremor, Incontinence and Altered Mental Status in a Patient With Neurocysticercosis: A Case Report 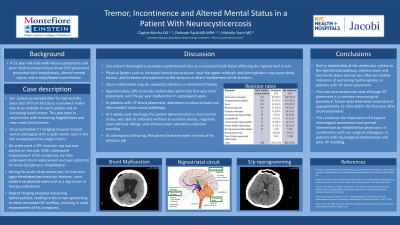 Case Description: The patient was a 51 year old male with a history of Neurocysticercosis and prior Ventriculorperitoneal shunt (VPS) placement who presented with a 3-week history of progressive bradykinesia, altered mental status, and urinary/bowel incontinence. Imaging on presentation showed marked ventriculomegaly with a cystic lesion seen in the left cerebellopontine angle cistern. Due to residual neurocysticercosis and presumed shunt malfunction, he underwent a VPS reservoir tap and was started on Dexamethasone. This resulted in initial improvement of his symptoms, and he then underwent shunt replacement. A few days into his acute rehab admission he developed masked facies and a progressive tremor, most evident while participating in ADL training. As a result of these symptoms, and regression in therapy, repeat imaging was ordered. A CT scan revealed worsening hydrocephalus, which lead to his shunt being reprogrammed to allow increased CSF outflow, resulting in rapid improvement of all his symptoms.

Discussions: A remarkable recovery was seen in our patient thanks to coordination of a multi-disciplinary team. When initially admitted he was unable to communicate, care for himself, or walk more than a few steps. At 5 weeks post discharge the patient demonstrated a clear mental status, was able to ambulate without an assistive device, negotiate stairs without railings, and even achieve lower extremity unilateral standing. This case emphasizes that although VPS placement is a common neurosurgical procedure; failure rates have been estimated at approximately 11–25% within the first year after shunt placement. This highlights the importance of frequent neurological assessment and prompt intervention in a patient with neurological deterioration and a VP shunt.

Conclusions: In patients with VP shunt placement, alterations in physical exam can often predict intra-cranial pathology. As a result, practitioners should have a low threshold for early intervention in these patients.