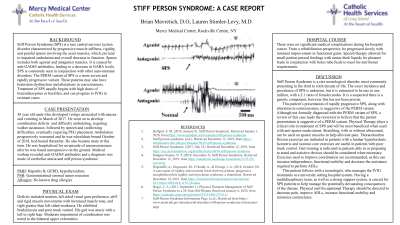 Case Diagnosis: Diagnosing Stiff Person Syndrome (SPS) requires high level of suspicion, and diagnosing includes positive anti-GAD65 antibodies. Medical work up for our patient initially ruled out common neurological and rheumatologic disorders. As his condition worsened, he found a neurologist who had concern over SPS. Work up included and was positive for anti-GAD65 antibodies, leading to the diagnosis of SPS.

Our patient is a 38-year-old male with initial symptoms of vertigo, nausea and vomiting in March 2017. He developed coordination difficulties after a few months, requiring a walker for ambulation. By October 2018, he had developed difficulty with speech and swallow, requiring PEG placement, and became mute. His gait worsened to the point of being bed-bound. In November 2018, the patient was found unresponsive and diaphoretic on the floor. Medical work up was negative for acute intracranial and cardiac process.


Discussions: Stiff Person Syndrome is a rare central nervous system disorder characterized by progressive muscle stiffness, rigidity, and painful spasms, which can lead to impaired ambulation and  decrease in function. There are a few variants of SPS, with the most severe and rapidly progressive being Progressive Encephalomyelitis with Rigidity and Myoclonus (PERM). The PERM variant also includes brainstem dysfunction, as well as alterations of consciousness. Treatment includes medications to reduce spasticity, IVIG, and rehabilitation. Our patient had rapidly progressive disease, along with alterations in consciousness, raising suspicion of the PERM variant of SPS, although this was never confirmed.

This case highlights a rapidly progressive incidence of SPS, from initial symptoms until bed-bound being two years. Most literature estimated approximately eight to ten years of progression to this level of disability. Early diagnosis and treatment can slow disease progression. Treatment usually involves benzodiazepines, IVIG, and rehabilitation. Having a multidisciplinary team, and strong support system, is crucial to help manage the devastating consequences of SPS.