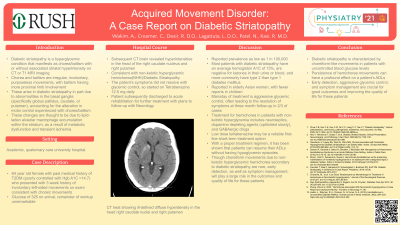 Case Description: The patient presented with a 3 week history of involuntary left-sided movements on
exam consistent with choreic movements.  Metabolic work up was notable for blood
glucose of 325 on arrival, hemoglobin A1C (HgbA1c) >14.7 but otherwise normal.
Subsequent CT brain revealed hyperintensities in the head of the right caudate nucleus
and right putamen, consistent with non-ketotic hyperglycemic hemichorea(NHH) /
Diabetic Striatopathy.

These changes are thought to be due to lipid-laden alveolar macrophage accumulation
within the striatum, as a result of metabolic dysfunction and transient ischemia.

Discussions: Diabetic Striatopathy occurs secondary to uncontrolled blood sugars, with an average
HgbA1c of 13%.  In this condition, hyperglycemia results in metabolic dysfunction and
transient ischemia, causing accumulation of lipid-laden alveolar macrophages in the
striatum.  Abnormalities in the basal ganglia result in alteration in motor control causing
chorea/ballism, with or without associated abnormalities on imaging (striatal
hyperintensity on CT or T1 MRI). Prevalence is as low as 1 in 100,000, and more
common in T2DM compared to type 1 diabetes.  Management is focused on aggressive
glycemic control, often leading to resolution of symptoms at 3 month follow-up in two
thirds of cases. Additionally neuroleptics, dopamine depleting agents, and
GABAergic drugs can be used to treat symptoms.  This patient’s symptoms did not
resolve with glycemic control, so she received tetrabenazine.

Conclusions:
Diabetic striatopathy is characterized by choreiform-like movements in patients with
uncontrolled blood glucose levels. Persistence of hemichorea movements can have a
profound effect on a patient’s activities of daily living. Therefore early detection,
aggressive glycemic control, and symptom management are crucial for good outcomes and
improving the quality of life for these patients.