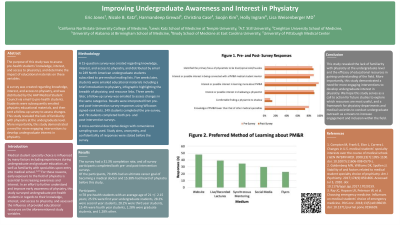 Objectives: The purpose of this study was to assess undergraduate students' knowledge, interest, and access to physiatry, and determine the impact of educational materials on these variables.

Design: A 15-question survey was created regarding knowledge, interest, and access to physiatry, and was distributed through email to 249 North American undergraduate students subscribed to pre-medical mailing lists. Five weeks later, students were emailed educational materials including a brief introduction to physiatry, infographic highlighting the breadth of physiatry, and resource links. Three weeks later, a follow-up survey was emailed to assess changes in the same categories. Results were interpreted from pre- and post-intervention survey responses using Wilcoxon signed-rank tests.

Conclusions: This study revealed the lack of familiarity with physiatry at the undergraduate level and the efficacy of educational resources in gaining understanding of the field. More importantly, this study demonstrated a need for more engaging interventions to develop undergraduate interest in physiatry. We hope this study serves as a call to action for future studies to explore which resources are most useful, and a framework for physiatry departments and medical societies to conduct undergraduate outreach as a means to increase engagement and inclusion within the field.