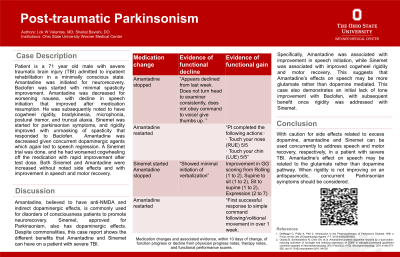 Patient is a 71 year old male with severe traumatic brain injury (TBI) admitted to inpatient rehabilitation in a minimally conscious state. Amantadine was initiated for neurorecovery. Baclofen was started with minimal spasticity improvement. Amantadine was decreased for worsening nausea, with decline in speech initiation that improved after medication resumption. He was subsequently noted to have cogwheel rigidity, bradykinesia, microphonia, postural tremor, and truncal ataxia. Sinemet was started for parkinsonian symptoms, and rigidity improved with unmasking of spasticity that responded to Baclofen.  Amantadine was decreased given concurrent dopaminergic agents which again led to speech regression. A Sinemet trial was done, and he had worsened cogwheeling off the medication with rapid improvement after test dose. Both Sinemet and Amantadine were increased without noted side effects and with improvement in speech and motor recovery.

Amantadine, believed to have anti-NMDA and indirect dopaminergic effects, is commonly used for disorders of consciousness patients to promote neurorecovery. Sinemet, approved for Parkinsonism, also has dopaminergic effects. Despite commonalities, this case report shows the different benefits that Amantadine and Sinemet can have on a patient with severe TBI. Specifically, Amantadine was associated with improvement in speech initiation, while Sinemet was associated with improved cogwheel rigidity and motor recovery. This suggests that Amantadine’s effects on speech may be more glutamate rather than dopamine mediated. This case also demonstrates an initial lack of tone improvement with Baclofen, with subsequent benefit once rigidity was addressed with Sinemet.

With caution for side effects related to excess dopamine, amantadine and Sinemet can be used concurrently to address speech and motor recovery, respectively, in a patient with severe TBI. Amantadine’s effect on speech may be related to the glutamate rather than dopamine pathway. When rigidity is not improving on an antispasmodic, concurrent Parkinsonian symptoms should be considered.