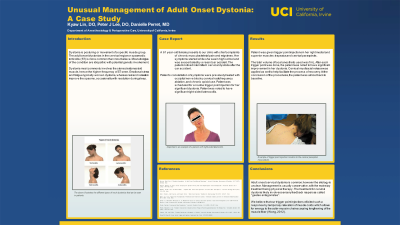 Case Diagnosis: Dystonia is posturing or movement of a specific muscle group. The adult onset dystonias in the cervical region or spasmodic torticollis (ST) is more common that most believe. Although most etiologies of the condition are idiopathic with potential genetic involvement, ST has been associated with neck trauma. Dystonia most commonly involves the sternocleidomastoid muscle, hence the higher frequency of ST seen. Emotional stress and fatigue typically worsen dystonia, whereas rest and relaxation improve the spasms, occasionally with resolution during sleep.

Case Description:  61 year old female presented to our clinic with chief complaints of chronic musculoskeletal pain and migraines. Her symptoms started while she was in high school and was exacerbated by a recent car accident. Patient noticed intermittent cervical dystonia after the car accident. Patient’s constellation of  symptoms were previously treated with occipital nerve blocks, cervical radiofrequency ablation, and chronic opioid use. Patient was scheduled for a routine trigger point injection for her significant dystonia. Patient was noted to have significant right- sided laterocollis.

Discussions: Patient was given trigger point injections in her right medial and superior muscle: trapezius, cervical paraspinals, and lumbar paraspinal. The total volume of local anesthetic used was 7 mL. After each trigger point was done, the patient was noted to have significant improvement in her dystonia. We applied myofascial release as well to help facilitate this process. At the conclusion of our procedure, the patient was almost back to baseline.

Conclusions: Adult onset cervical dystonia is common, however the etiology is unclear. Managementd is usually conservative, with the mainstay treatment being physical therapy.The treatment for cervical dystonia likely involves sensory feedback responses called “gestes antagonistes”. We believe that our trigger point injections elicited such a response by temporary relaxation of  muscle cords which allows for energy to the actin-myosin chains causing lengthening of the muscle fiber (Wong, 2012).