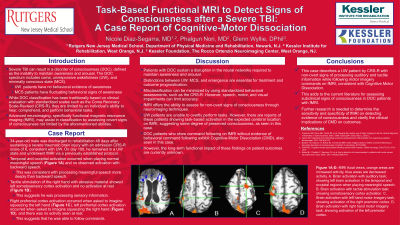 Discussions: Patients with disorders of consciousness (DOC) sustain a disruption in the neural networks required to maintain awareness and arousal.  Distinctions between UW, minimally conscious state and emergence are essential for treatment and prognosis. Misclassification can be minimized by using standardized behavioral assessments, such as the CRS-R. However, speech, motor, and visual impairments can limit accuracy. fMRI offers the ability to assess for non-overt signs of consciousness through neuroimaging techniques. UW patients are unable to overtly perform tasks. However, there are reports of these patients showing task-based activation in the expected cerebral location on fMRI, suggesting some degree of preserved consciousness, as seen in this case. DOC patients who show command following on fMRI without evidence of behavioral command following exhibit Cognitive-Motor Dissociation (CMD).

Conclusions: This case describes a UW patient by CRS-R with non-overt signs of processing auditory and tactile information while following motor imagery commands on fMRI, consistent with CMD. This adds to the current literature of fMRI to assess for subclinical signs of consciousness in DOC patients. Further research is needed to determine the sensitivity and specificity of fMRI on detecting evidence of consciousness and clarify the clinical implications of CMD on outcomes.