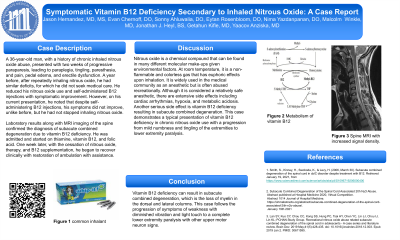 Case Description: A 36-year-old man, with a history of chronic inhaled nitrous oxide abuse, presented with two weeks of progressive paraparesis, leading to paraplegia, tingling, paresthesia, and pain, pedal edema, and erectile dysfunction. A year before, after repeatedly inhaling nitrous oxide, he had similar deficits, for which he did not seek medical care. He reduced his nitrous oxide use and self-administered B12 injections with symptomatic improvement. However, on his current presentation, he noted that despite self-administering B12 injections, his symptoms did not improve, unlike before, but he had not stopped inhaling nitrous oxide.
Laboratory results along with MRI imaging of the spine confirmed the diagnosis of subacute combined degeneration due to vitamin B12 deficiency. He was admitted and started on thiamine, vitamin B12, and folic acid. One week later, with the cessation of nitrous oxide, therapy, and B12 supplementation, he began to recover clinically with restoration of ambulation with assistance.

Discussions: Nitrous oxide is used as an anesthetic but is often abused recreationally due to euphoric effects upon inhalation. Nitrous oxide abuse can lead to vitamin B12 deficiency through the inhibition of methionine synthase, resulting in the loss of myelin in the dorsal and lateral columns (subacute combined degeneration). This case demonstrates a typical presentation of vitamin B12 deficiency in the setting of chronic nitrous oxide, progressing from mild numbness and paresthesia to paraplegia.