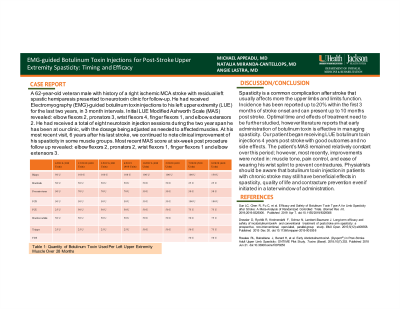 Discussions: Spasticity is a common complication after stroke that usually affects more the upper limbs and limits function. Incidence has been reported up to 20% within the first 3 months of stroke onset and can present up to 10 months post stroke.  Optimal time and effects of treatment need to be further studied, however, literature reports that early administration of botulinum toxin is effective in managing spasticity. Our patient began receiving LUE botulinum toxin injections 4 years post stroke with good outcomes and no side effects. The patient’s MAS remained relatively constant over this period; however, most recently, improvements were noted in muscle tone, pain control, and ease of wearing his wrist splint to prevent contractures.

Conclusions: Physiatrists should be aware that botulinum toxin injection in patients with chronic stroke may still have beneficial effects in spasticity, quality of life, and contracture prevention even if initiated in a later window of administration.