A newly-sustained spinal cord injury in the inpatient rehabilitation unit: When is worsening of function simply debility versus something more emergent? 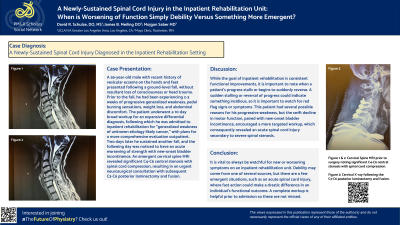 Case Description: A 56-year-old male with recent history of vesicular eczema on the hands and feet presented following a ground-level fall, without resultant loss of consciousness or head trauma. Prior to the fall, he had been experiencing 2-3 weeks of  progressive generalized weakness, pedal burning sensations, weight loss, and abdominal discomfort. The patient underwent a 10-day broad workup for an expansive differential diagnosis, following which he was admitted to inpatient rehabilitation for “generalized weakness of unknown etiology likely cancer,” with plans for a more comprehensive evaluation outpatient. Two days later he sustained another fall, and the following day was noticed to have an acute worsening of strength with new-onset bladder incontinence. An emergent cervical spine MRI revealed significant C4-C6 central stenosis with spinal cord compression, resulting in an urgent neurosurgical consultation with subsequent C3-C6 posterior laminectomy and fusion.

Discussions: While the goal of inpatient rehabilitation is consistent functional improvements, it is important to note when a patient’s progress stalls or begins to suddenly reverse. A sudden stalling or reversal of progress could indicate something insidious, so it is important to watch for red flag signs or symptoms. This patient had several possible reasons for his progressive weakness, but the swift decline in motor function, paired with new-onset bladder incontinence, encouraged a more targeted workup, which consequently revealed an acute spinal cord injury secondary to severe spinal stenosis.

Conclusions: It is vital to always be watchful for new or worsening symptoms on an inpatient rehabilitation unit. Debility may come from one of several sources, but there are a few emergent situations, such as an acute spinal cord injury, where fast action could make a drastic difference in an individual’s functional outcome. A complete workup is helpful prior to admission so these are not missed.