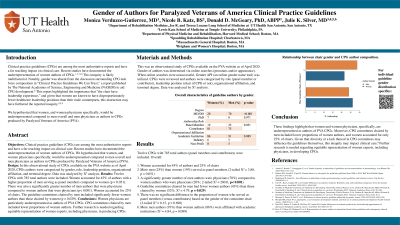 Objectives: Clinical practice guidelines (CPGs) are among the most authoritative reports and have a far reaching impact on clinical care. Recent studies have documented the underrepresentation of women authors of CPGs. We hypothesized that women authors, and women physician authors specifically, would be underrepresented compared to men overall and men physicians in CPGs produced by Paralyzed Veterans of America (PVA).

Design: Observational study of CPGs available on the PVA website as of April 2020. Gender of authors was determined via online searches (pronouns and/or appearance). When online searches were unsuccessful, Gender API (an online gender name tool) was utilized. CPGs were reviewed and authors were categorized by role (panel member or contributor), leadership position (chair of CPG or not), organizational affiliation, and terminal degree. Data was analyzed by Chi-square analysis.

Results: Twelve CPGs with 785 total authors (panel members and contributors) were included. Women accounted for 45% of authors with a significantly higher proportion of men serving as panel members (25%) compared to women (19%; two-tailed X2=3.80, p=0.051). There was also a significantly greater number of men physician authors (70%) compared to women physician authors (20%; two-tailed X2=200.0, p< 0.001). Women accounted for 25% of chairs. The guideline committees chaired by men included fewer women authors (43%) than those chaired by women (52%; X2=4.79, p=0.029), though there was no significant difference in the proportion of women who served as panel members (versus contributors) based on the gender of the committee chair (two-tailed X2=0.15, p=0.698). Analysis of organizational affiliation revealed a trend toward more men authors being affiliated with academic institutions (91%) than women (86%; X2=4.84, p=0.089).