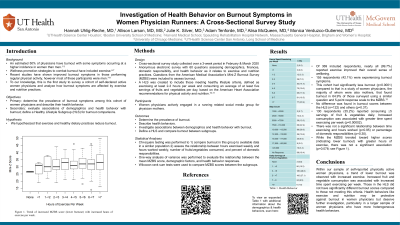 Objectives: The primary objective was to investigate which factors are associated with burnout symptoms among self-declared active women physicians practicing in the United States (US).

Design: Cross-sectional electronic survey study consisting of 60 questions covering demographics, health behaviors, and burnout scores as assessed by the Mini-Z Burnout Survey (MZBS). Those surveyed were women physicians in the US actively engaged in a social media group for runners (Mama Docs Run This).

Results: Of the 1,000 actively engaged Facebook group members, 382 (38.2%) completed the survey with 369 meeting inclusion criteria as attending women physicians practicing in the United States. The majority reported being white (74.5%) and at least six years out from training (85.9%). One hundred and fifty-five respondents (42.1%) indicated that they were experiencing burnout or its symptoms on the MZBS. We observed a trend of lower burnout with increased exercise (p=0.078). Increased time exercising was significantly associated with increased fruit and vegetable consumption (p=0.00002). A healthy lifestyle subgroup (HLS) was defined based on recommendations for physical activity (at least 150 minutes of moderate physical activity weekly) and nutrition (consuming at least five fruits/vegetables daily). The HLS was found to work significantly fewer hours (p=0.039); have more children (p=0.005); and, earn lower compensation (p=0.04). There was no significant difference in burnout between this subgroup compared to others (p=0.37).

Conclusions: Within our sample of self-reported physically active women physicians, a trend of lower burnout was observed with increased exercise. Increased fruit and vegetable consumption was associated with increased time spent exercising per week. Those in the HLS did not have significantly different burnout scores compared to those not meeting this criteria. Health behaviors like exercise and nutrition may be protective against burnout in women physicians but deserve further investigation.