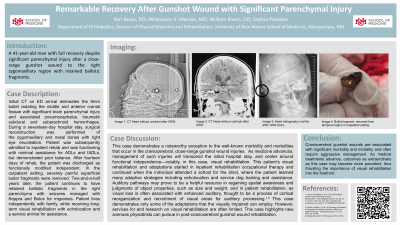 Case Diagnosis: A 41-year-old man with full recovery despite significant parenchymal injury after a close-range gunshot wound to the right zygomaxillary region with retained ballistic fragments.

Case Description: Initial CT on ED arrival delineates the 9mm bullet violating the middle and anterior cranial fossae with significant brain parenchymal injury and associated pneumocephalus, traumatic subdural and subarachnoid hemorrhages. During a seventeen-day hospital stay, surgical reconstruction was performed of the zygomaxillary and nasal bones with right eye enucleation. Patient was subsequently admitted to inpatient rehab and was functioning with minimal assistance for ADLs and IADLs, but demonstrated poor balance. After fourteen days of rehab, the patient was discharged as functionally modified independent. In the outpatient setting, severely painful superficial bullet fragments were removed. Two-and-a-half years later, the patient continues to have retained ballistic fragments in the right parenchyma with seizures managed with Keppra and Botox for migraines. Patient lives independently with family, while receiving long-term visual rehabilitation with echolocation and a service animal for assistance.

Discussions: This case demonstrates a noteworthy exception to the well-known morbidity and mortalities that occur in the craniocerebral, close-range gunshot wound injuries.  As medicine advances, management of such injuries will transcend the initial hospital stay, and center around functional independence—notably, in this case, visual rehabilitation. This patient’s ability to learn echolocation with use of a service dog demonstrates only some of the adaptations that the visually impaired can employ. However, services for and research on visual rehabilitation are often limited. This case illustrates new avenues physiatrists can pursue in post-craniocerebral gunshot wound rehabilitation.

Conclusions: Craniocerebral gunshot wounds are associated with significant morbidity and mortality and often require aggressive management. As medical treatments advance, outcomes as extraordinary as this case may become more prevalent, thus thrusting the importance of visual rehabilitation into the forefront.